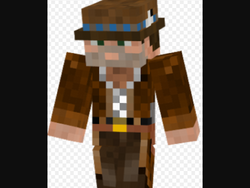 Cowboys are neutral mobs that spawn in the mesas and deserts. They are usually wearing leather jackets and brown boots riding a horse, and during Halloween sometimes they are a skeleton riding a skeleton horse, they attack players (if provoked) villagers (sometimes), monsters, cows, and other animals (except horses, cats, and dogs).

Their attack is simple, their horse either jumps on you and prances on you, or they whip their rope at you. Due to some glitches, they were seen actually getting off their horse and hitting you.

Retrieved from "https://minecraftfanon.fandom.com/wiki/Cowboy?oldid=39749"
Community content is available under CC-BY-SA unless otherwise noted.