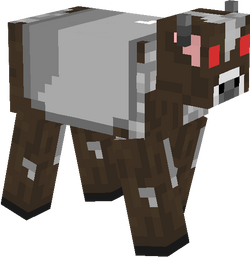 Hellspawns are aggressive and hostile mobs. They, along with cows and mooshrooms, are the only source of leather and raw beef. Through spontaneous combustion, when milked with a bucket, they produce lava. They are 2 blocks tall, 1 blocks wide, and 2.5 blocks long.

Hellspawns have black/brown skin with white spots and a silver-back, accompanied by blood-red eyes. All male cows have a pair of ebony horns on their head which can be poached, and all female Hellspawns have udders for milking.

Hellspawns roam in the Overworld and are of the few mobs which have the ability to travel to the Nether. They usually are in herds of 4 to 10, however, it is not uncommon to find a lone Hellspawn. They tend to walk around quickly but aimlessly, mooing, but they will not flee and jump wildly if attacked; instead, they will fight to the death if anything enters their zone. They also tend to jump off high cliffs and survive the process due to their powerful, shock absorbing hind legs. Hellspawn will make many attempts to stay out of and away from water and will not attack the player when he/she is holding rotten flesh, which is used for breeding them. A Hellspawn can be milked by first taming, then using a bucket on a female, while below the udder. A Hellspawn may be milked six numbers of times, after which they will become untamed and aggressive.

Used to make reinforced armor which is an enhanced, double sleeved, black-armor leather jacket. It offers significant protection when fully used as armor, being compared to Iron armor and superior to regular leather armor and chainmail armor.

This particular meat is only found on the corpses of Hellspawns. It heals more health than other meats and also gives a rather high dose of fire resistance. Cooked Hell-Beef also gives a +50% damage bonus upon consumption.

Similar to natural lava, this increased heat version of the lava is extremely hot. If placed on dirt, it will seep through destroying all blocks until hitting stone. The lava also moves at the speed of water, thus making it a hit for deathtraps lava moats.

Only found on male Hellspawn, these horns are rare drops on their corpse. When used as a material for smelting or enchanting, it gives an increase in smelt-speed or enchantment durability.

Retrieved from "https://minecraftfanon.fandom.com/wiki/Hellspawn?oldid=39838"
Community content is available under CC-BY-SA unless otherwise noted.