You may be looking for Herobrine (disambiguation).

Herobrine is a main antagonist in most stories of fanon Minecraft. According to the Creepypasta, he is Notch's dead brother and possibly Nidarc's brother too. We have no idea. The first sighting of Herobrine stated that Notch had said "I have a brother he is no longer with us" but has later stated that he has no brother, aside from a half-brother whom he rarely sees.

Legends say he is the ruler of the Nether, sort of an inversion of Notch's Overworld. He makes ghastly experiments, such as reanimating Pigmen, brewing potions (such as the Sangue Rosso), and creating plots to take over the Overworld. He also destroys the leaves on trees and sets out traps for Minecrafters.

According to Notch, he can be summoned by killing animals with lava, and is a benevolent being.

He can be obtained into the game by using mods like Herobrine's Mod. In that mod, they add Herobrines including Burrito Brine, Blaze Brine, standard Herobrine, H20 hero, and Foliage Brine. In some works, he is a good guy; he is only warning us about entity 303. That is why he griefed us all to show what entity 303 will do in the future

He has been said to run and swim faster than the player, though he has also been said not to move conventionally at all, relying solely on his ability to teleport. He can differentiate every material and block. He has the ability to build and destroy and it is thought that he has a limited supply. He takes up 2 forms-Canonical and Vengeful, In his Canonical form he stalks the player and disappears if approached. In his Vengeful form, he has been reported to ensnare the player in traps, wait for them to enter his dungeon and seal them inside or teleport behind them and kill them. He is supposedly responsible for breaking the player's creations and stealing from their chests. He reportedly has telekinesis, reality warping powers, and is virtually invincible.

The initial sighting of Herobrine reported no abilities, and Herobrine simply ran away from the player.

Currently, Herobrine has not been proven present in any version of Minecraft.

However, you can have Herobrine present in your PC world by downloading a mod or have a player wear a Herobrine skin activated.

On the Xbox and PlayStation version of Minecraft, players that download various skin packs may come across multiple Herobrine variants. These include the standard skin and Zombie Herobrine.

As for there being a real Herobrine incorporated into the game, Minecraft developers have stated that they would one day like to have Herobrine as part of the game...

Prior to Beta 1.8, there was a mob simply titled "Monster" which looked exactly like Steve, it could be spawned in preclassic, but this feature was later removed in the early stages of classic; Intriguingly, beta 1.6.6, an update in which all of the monster's class files were removed, was also the first time Notch included the "removed Herobrine" message present in the changelogs.

The original sighting included a screenshot, in which leaves were lighter than the color they were changed to in Alpha 1.2.0, meaning the "monster" was still present in the game, and had it's stats intact, though it couldn't spawn. It may be possible that in versions prior to beta 1.8, these "monsters" spawned due to a glitch, being misidentified as Herobrine. As for Notch having a dead brother, Notch has two siblings: An estranged half-brother (source) and a sister (source), both of whom are still living and neither of who are in the game.

"I've publicly told people there's never been any such thing as Herobrine, and that I don't have any dead brothers, and that letting too many animals die in lava is a foolproof way to summon him but that you don't need to be afraid of him. He only means well, he's looking out for you, trying to warn you of the dangers you can't see. There certainly are NO physical manifestations of Herobrine that will sneak out of your computer if you leave Minecraft running at night, looming over you as you sleep with his pale eyes inches away from your face, as he tries to shout at you to wake up. Sometimes you wake up with a jolt, and he's gone, and all that lingers is the memory and faint echo of his wordless screaming. Of course, it was just a dream. There's no way a morally dubious ghost with a god complex could at any point decide to haunt the children who play my game "for their own good", as there is NO SUCH THING. etc -Notch

"Herobrine cannot be destroyed!" -Herobrine, at the end of Herobrine's Legend (book) 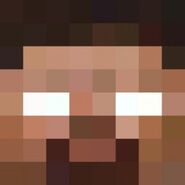 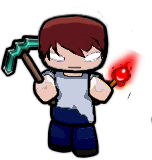 First sighting of Herobrine
Add a photo to this gallery

Retrieved from "https://minecraftfanon.fandom.com/wiki/Herobrine?oldid=46113"
Community content is available under CC-BY-SA unless otherwise noted.