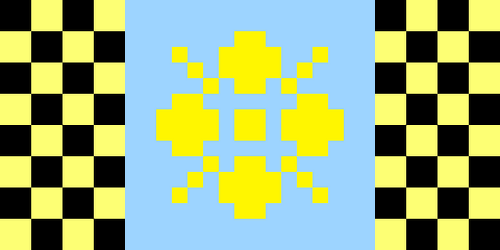 The Commune of New Marvel (formerly known as Greater Marvel) is the name of the collective of city-states situated southwest of Sarageth and south of Laaos. Marvel City, destroyed by the forces of Herobrine during the doomsday event. Marvel's territory is largely arid deserts and Savannas with major population centers based along rivers and the coastline.

New Marvel has one of the largest land areas of the four Minecraftian governments, with a territory of 1,052,160 square miles, but has the lowest population, at only 818,623.

Marvel is one of the oldest Germanic nations still in existence in Minecraftia, almost as old as Mineu. The first communities of Tyle and Urboh were established along the coast around only 25 years after the creation of Mineu.

The founding of Marvel city occurred around 50 years after the start of Marveliotan culture, and miners and adventured traveled there on their way from coastal cities to rest and restock on supplies, making their journeys much easier and less deadly, significantly increasing the economic status of the various city-states.

As the riches of the lands increased, so did raids and robberies, and dangerous highwaymen and bandits soon presented a major problem for caravans. After several years of negotiation and treaties to assure autonomy, the entire land was united under one government, and named Greater Marvel, after the city that had brought it such fortune.

The Legions of the Nether attacked Greater Marvel as part of their conquest of Minecraftia. The invading legion attacked from the north and assailed caravans and mining villages, but were stopped for several weeks attempting to topple Marvel city, even with the help of hostile mobs from the overworld and Endermen, until Herobrine himself lead the final charge which broke into the city.

The people of Greater Marvel were initially battered by the loss of their capital, but used the vastness of their land to their advantage, launching attacks from moving warbands which could rarely be pinned down by the enemy in the vast deserts.

Near the end of the war, the legion pulled out of Greater Marvel to concentrate their forces, so a massive fleet was launched from the coastal cities to assist the other nations in driving the legion out once and for all.

Greater Marvel was renamed New Marvel and it joined Mining and Crafting, and though it initially needed extensive support from it's allies given the fall of it's economic hub, after a few years of hard work, the country came to be an economic powerhouse once more.

Marvelite culture has always been based on luxury. Wealth is a symbol of accomplishment and intelligence in Marvel's culture, and obtaining it through loopholes or system manipulation is very frowned upon.

Pre-destruction Marvel built vast underground structures known as corridor temples, many of which reached truly gargantuan sizes. The largest such monument, the Blue Corridor, spanned hundreds of blocks in diameter and roughly 60 blocks in height, all concealed below the sands of Marvel's harsh deserts.

The corridor temples served to honor the Marvelite pantheon, but when the legions of the nether ransacked the countryside, the temples fell into ruin. The Boiling Crystal Golem garrison still guards the Blue Corridor, while other locales have fallen into ruin and been overrun by arthropods.

Marvel's culture was shaped very much by the destruction of Minecraftia, and the civilization as a whole became much more warlike. Armor and weapon ownership became much more common following the Destruction. Many houses in Marvel now have trophy rooms dedicated to mob heads and equipment recovered from the war.

Vast savannas and deserts cover most of Marvel, with elevation varying from very low deserts to mesas and mountainous peaks. Marvel is very mountainous in it's eastern regions and borders coasts on all directions except north.

Retrieved from "https://minecraftfanon.fandom.com/wiki/Marvel?oldid=42881"
Community content is available under CC-BY-SA unless otherwise noted.