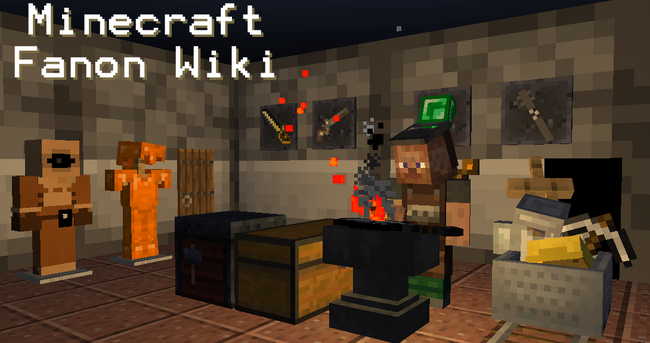 Welcome to the Minecraft Fanon Wiki
The Number 1 Minecraft fan content site on the web!

This is the wiki dedicated to providing fan content and stories to for the Minecraft world! Part of the Minecraft Wiki Network.
We currently have 2,978 articles, 36 active users and 61,710 edits.


Read our Policies and get involved!

Know of another active series on the wiki? Add it!

Standalone Stories Hub: Standalone stories from the writers of the Minecraft fanon wiki.

Withering Heights: Steve and his friends must collect the seven cubes and stop Herobrine. Badowie has been working hard on this, so give it a read! Status: Relocated to wordpress

Land of the Champions (A Minecraft/Terraria Crossover): This is a series presented by Terrarian Pony, the creator of Fallout: Terracraftia. It features not only stories, which are released in episodic format regularly, but also animations and a side series entitled Lore of the Champions: A Champion's Guide to the Land of the Champions. This is a fantastic series especially for those interested in worldbuilding and lore, and for the Terraria fans of the Minecraft Fanon Wiki. Status: active

Fallout: Terracraftia: Minecraft meets Terraria meets Fallout meets D&D. It's about as crazy as it sounds, and just as entertaining. Written by Terrarian Pony. Status: active

Aftermath Minecraftia: The sequel to Destruction of Minecraftia. After Herobrine and his army of Endermen destroyed most of Minecraftia, causing the deaths of billions, the nation of survivors face many threats across their journey to take back their world. Started by Nero

(probably). Status: hiatus, possibly discontinued (has not been added to since 4/8/2014)

Nominate the new featured picture on the talk page!

Minecraft 2.0.0: Caves & Canyons is an update being worked on by Badowie.

Nominate a new featured article on the talk page!

Make sure to read our Policies BEFORE you start editing!

If you want to create a new page, click here. You do not need any special approval to start making pages on the Minecraft Fanon Wiki, so long as they follow our rules, so start creating what you like!

If you want to edit an existing page, make sure that it's alright with the owner of that page first by leaving a comment.
New pages

This wiki is part of the Minecraft Wiki Network! Check it out!

Community content is available under CC-BY-SA unless otherwise noted.
Advertisement